(affiliate link) for my daughter's birthday, and so I thought I'd write an honest review. We'd been looking for some outdoor play equipment for the garden for some time, and having read lots of reviews ourselves we decided that the Plum Tamarin looked like it would be good value for money, as well as being sturdy enough to ensure years of use. The play centre consists of two swings, a slide and a play deck. Because the set comes with two swing seats designed for an older child we also purchased a baby swing seat for our two year old. My children are aged four and two.

The play centre was delivered in two long thin boxes, one smaller boxes and a separately packaged slide. The first thing that we did was open up all the boxes and check the parts. The wooden pieces were labelled which made this easy, and we were very pleased with the quality. 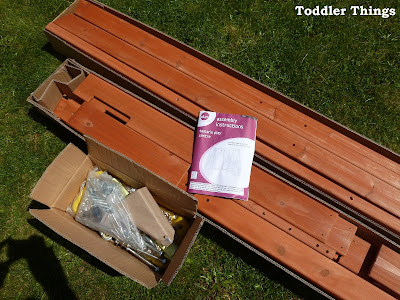 We've never built garden play equipment before, but we like to think that we are pretty proficient when it comes to assembling things like flat pack furniture. We also have a reasonable selection of tools. So we were surprised to find that we didn't have all of the tools that were needed, having to borrow them from family.

It's very important to assemble the wooden frame according to the pictures in the instructions, even though it seems an awkward way to do it, otherwise as we found out the pieces don't fit together properly. This means that you have to screw the first few pieces in while the frame is upside down, which didn't feel very stable - we ended up propping it up with chairs as we were worried that it would get damaged. 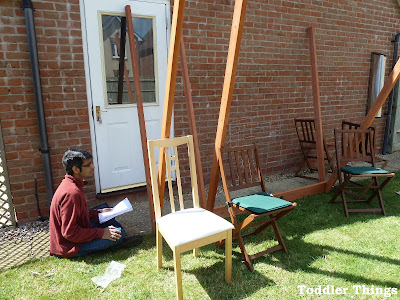 The instructions state that it will take two adults approximately four hours assembly time, but it did take us a lot longer than that, perhaps because we couldn't get on with it all in one go. You definitely do need two adults to assemble, as at times one will need to support the structure while the other puts in the screws. For all the screws that are needed our electric screwdriver came in very handy. 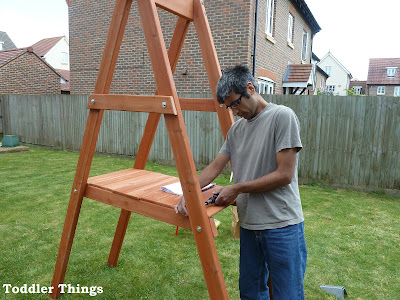 The instructions themselves are pretty clear, but you need to make sure that you take your time and follow them carefully. They may look as though they are waiting patiently, but the children were getting desperate to try it out! 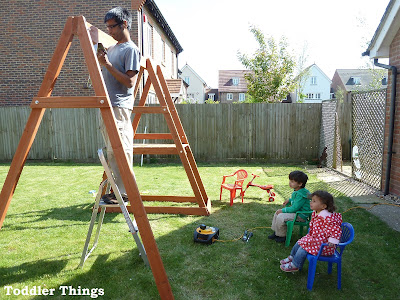 Fortunately we got there in the end, and the children were finally able to have a go! They were so excited, and it was definitely a successful purchase. We are lucky enough to have a good sized garden, but it is a compact set and would definitely fit nicely into a smaller garden. The slide has a bump in it which they love, and although the "play deck" is perhaps a little misleadingly titled, we've still had a lot of fun making a tent over it with a blanket. 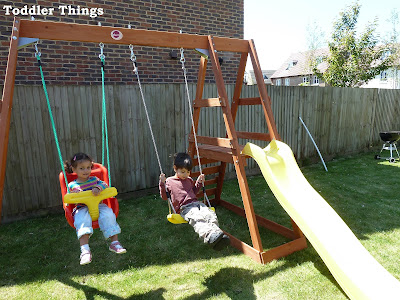 We haven't yet cemented the posts into the ground as instructed, but because the children are still very small it feels very stable and I have no worries about it tipping over. We've been using it for a few weeks now and it is being played on almost daily.

The Plum Tamarin garden play centre really is a fantastic set for the garden, and I would certainly recommend it. It's definitely value for money, and I think that it will last as long as we need it to. Just be aware that some DIY skills are required for the assembly, and make sure that you have all the tools that you need before you get started.

There are also plenty of accessories that you can buy which are compatible with the play centre. As I mentioned we purchased the baby swing seat, and we also bought a rope ladder. My children are a bit too young for it at the moment, but it will be good to bring out in a couple of years for a bit of extra interest. If you are considering purchasing and have any questions, please do get in touch! You can find my contact details on my About page.