(affiliate link) for my son for Christmas when he was nearly 4 years old. I think that he is just the right age to begin playing with Playmobil - he is old enough not to put the small parts in his mouth, it isn't too fiddly for him, and he loves role play and making up his own stories. I must admit that Playmobil was one of my favourite toys when I was young, and I couldn't wait until he was old enough to start collecting some of his own! The Lion Knight's Empire Castle is a big set, but I think absolutely justified by the amount of time that he has spent playing with it. This review has two parts - some notes with my thoughts about the set and a video review with a more detailed look at the various parts of the castle.

The Lion Knight's Empire Castle took me several hours to build. The instructions were clear, but parts of it were quite fiddly. When you open the box you find dozens of little plastic bags full of pieces but there is no real logical order to their distribution, so you need to open them all up before you can begin. There are extras of some of the tiny connecting pieces. 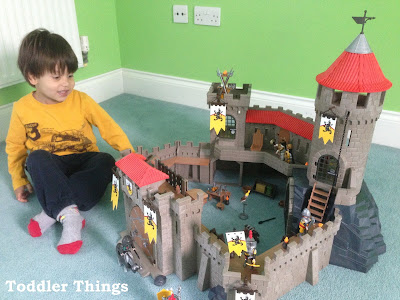 When assembled, the castle has all the features that you would expect - ramparts, towers, battlements, a dungeon, courtyard and King and Queen. There are also four knights, two horses and a skeleton figure. Many of the pieces are very tiny, so you do need to supervise younger children with them.

The castle is large enough for two children to play with at once. I have found that the walls do come apart easily when the castle is being played with, although it's easy to snap the pieces back into place and it doesn't bother my son. He's able to operate all of the features except for the cannon, which requires a little more strength.

This Playmobil castle has been fantastic for encouraging role play. It is the first toy that my son has played with happily by himself, making up his own stories. The castle also mixes well with our other Playmobil sets, even those from different ranges. In particular we have a few pirates, and they are often to be found attacking the castle.

I'd definitely recommend this castle for children. It's worth keeping an eye out on Amazon as the prices do go up and down. And now onto the video segment of my review, where I take a look at some of the features of the castle.


You can buy the castle and other sets in the same range from Amazon.