Recently I held an Antarctica Day for my children as part of a series of themed days. While I was searching for inspiration I found it difficult to pin down resources that were specifically Antarctic themed, so I thought I'd share them here. 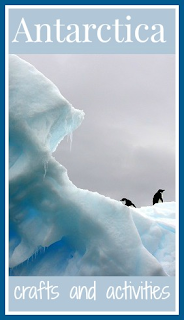 Antarctica is the southernmost continent on Earth. It is technically considered a desert as it has hardly any rain. Antarctica has no permanent residents, although there are research stations across the continent where people live. 90% of the world's ice is found in Antarctica, and about 98% of the surface is covered by a sheet of ice at least one mile thick. Antarctica is the coldest continent on Earth. It has no government and no official flag, although the Antarctic Treaty has adopted a flag which is used as an unofficial symbol of the country. You can find out more about Antarctica on Wikipedia.

When learning about Antarctica with young children it's important to remember - there are no polar bears in the Antarctic, they live in the Arctic. And penguins are only found in Antarctica. So you won't find penguins and polar bears together!


Antarctica doesn't have a great deal in the way of wildlife, but the most commonly known Antarctic resident is the penguin. Here's how to make a penguin picture with igloo and snow.

Cotton wool balls can be very cheap and make great snow. Glue to paper to create snowy scenes and igloos.


Children can usually easily find Antarctica on a map, but because maps are flat it gives a somewhat distorted view when Antarctica is in fact roughly circular in shape. Print out a map of Antarctica for child to cut out and colour, and find a globe so that you can show them Antarctica's true shape.

Be careful when searching for Antarctica themed colouring pages. Many that are titled Antarctica include animals like Polar Bears. I found some very good Antarctica colouring pages on this page. We coloured them in, cut them out and stuck them onto a large piece of white paper to make a poster.

is a fine powder which you add water to and make it fluff up into pretend snow. A little goes a very long way, and it's great for creating a snowy landscape which children can drive trucks and cars through.

- A lot of detailed, but aimed at younger children so it's all in an easy to understand format, great for teaching children a few facts, and also for adults to read up on to answer all those questions!

- If your child's interest has been fuelled then they will love this wonderfully detailed map book.

- The story of how Emperor Penguins incubate their young is fascinating, as the female heads back to sea after laying the egg, leaving the male to look after it. A great way to introduce children to the story of a penguin. Although factual it will definitely keep your young child's interest.

The Penguin Who Wanted to Find Out

- Otto the penguin needs to learn about how to survive in the harsh Antarctic climate, and although a story also has a lot of factual information about penguins.

- Instant Magic Snow is brilliant for all sorts of snowy play and sensory scenes, a little goes a long way and you can re-use it when it dries up.

- Gorgeous soft and cuddly penguin, perfect for younger toddlers while their older siblings are learning about Antarctica.

- Schleich are known for high-quality animal figures, and these are perfect for some Antarctic play.

Photograph used is by Teodor Bjerrang via Unsplash.
Posted by Jennifer Jain at 20:43