Tips for flying with a toddler

We've flown with young toddlers a few times now, ranging from long haul flights across the Atlantic to short hops to Europe. I won't pretend that it's a huge amount of fun, but we've developed some tips and strategies that have made it all a lot easier for us!

The main thing is preparation. Organise your hand luggage into items that you will need on the plane and those that you don't. In hand luggage I always pack a pair of pyjamas and everything else needed to settle a child to sleep in case of lost luggage as well as spare clothes and nappies. You probably won't need these on the flight, so they can go straight into the overhead locker.

Then make sure it's easy to remove the things that you will want on the flight. For us, this is teddies, drinks, snacks and entertainment. It's a good idea to keep a pack of wipes and a couple of nappies handy to save you needing to take an entire change bag into the cramped aeroplane toilet. If you plan this in advance you can get everything sorted as soon as you get on the plane, without needing to do too much unpacking of bags.

At the airport, check if there is a special security lane for passengers with young children. There may be more space to move around and you won't feel so pressured to move quickly. Check with the airport before you fly if you are unsure of the restrictions on the liquids that you can take for babies and children. For toddlers we generally pack empty sippy cups that we can fill with purchased water after security.

A child under two years old will need to sit on your lap, ideally for the duration of the flight in case of unexpected turbulence, but always during take off and landing. We've always struggled with this bit with our wriggly young toddlers. We leave it until the very last minute to strap them in, and distract with a drink and snacks. When checking in, especially for a longer flight, it's worth asking if there will be any spare seats on the plane and if one can be reserved next to you so that you can have a bit of a break, and also to give you a bit more space.

With regard to entertainment on the flight, it's always been a tablet that has worked best for us. Aeroplanes are noisy, so the noise of the tablet should hopefully not disturb other passengers too much and in my opinion is better than a child screaming. It's worth trying your toddler with headphones before the flight though, because they may like them and it is preferable if they are able to wear them (ones that fit over the top of the ears) to avoid too much noise for other people.

I also pack a colouring book, stickers and crayons. When packing toys to take on the plane, remember that there is a very good chance that toys with small parts will end up dropped on the floor, and with a toddler on your knee it's almost impossible to retrieve them.

Don't forget that once you get off the plane it's not all over. When entering the US from abroad for example, you can end up waiting for over an hour to clear immigration. If you have a ride on suitcase, like a Trunki for example, this is great for toddlers as they have somewhere to sit down (you won't have your pushchair back at this point). Reserve some snacks too! 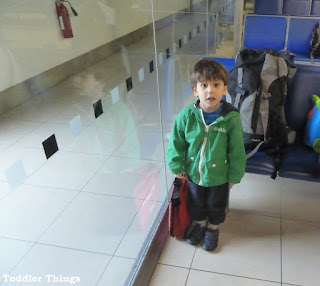 At the end of the day, you will get through it and it's just a few hours out of your holiday. Usually the anticipation is much worse than the actual flight!
Posted by Jennifer Jain at 12:41