According to the Office for National Statistics, today, the most popular birthday in the UK for the last 20 years falls today on the 26th September. In addition, eight of the top ten birth dates are towards the end of September. To celebrate, Netflix have released their brand-new Birthdays On-Demand feature. 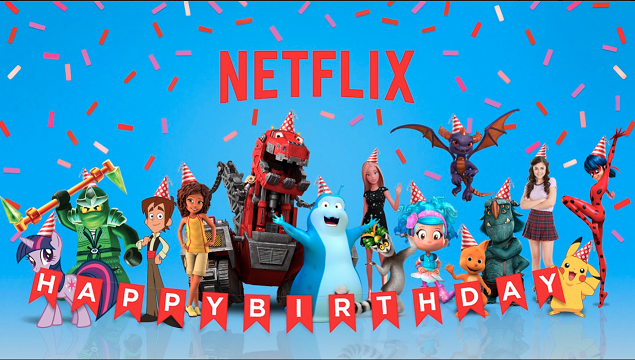 Netflix has revealed that 64% of children's parties are themed after their favourite TV shows or movies, and 70% of parents find organising a birthday party for their child stressful. With this feature, parents can add a little bit of extra magic to the festivities. Netflix has released 15 Birthdays On Demand, with characters including Pokemon, My Little Pony and Barbie.

All you need to do is search 'birthday' on Netflix and you can unlock a special performance. Your child's favourite characters will sing them a special birthday greeting, and it's a great way to make their birthday special.

Birthday messages from the following shows are available, and you'll definitely find one that suits your child, however old they are going to be!

Survey methodology - The survey was conducted by SurveyMonkey from June 26th-July 10th, 2017 and based on 14,582 responses. The sample was representative of an adult online population who have a child 8 years or younger in the household in The United States, UK, Philippines, Singapore, India, South Korea, Mexico, Brazil, Argentina, Colombia, Chile, Peru, Turkey, France, Germany, and Italy. The sample was not weighted or balanced. Within individual countries, the margin of error is +/-3% at the 95% confidence interval in all countries except Singapore (+/-5%), South Korea (+/-4%), and Argentina (+/-4%).
Posted by Jennifer Jain at 11:28